At the moment if you take a walk into the wooded portion of the Notre-Dame-des-Neiges Cemetery, you will see an abundantly growing, attractive yellow flower in much of the forest understory.

You might be tempted to conclude that it is the native Stylophorum diphyllum (wood poppy), which has similar leaves and flower. You would unfortunately be incorrect. This is actually the introduced species Chelidonium majus (greater celandine), which resembles Stylophorum diphyllum primarily because they are both members of the family Papaveraceae (poppy family). The native variety, however, has much larger flowers, its leaves are more deeply incurved, and its seed pods are round and hairy rather than the long and slender ones we see in this species.


This species is a member of the Papaveraceae (poppy family), so produces the latex-filled sap that is characteristic of this family. Given that, if you're sensitive to such things I would not recommend walking through a population of these in shorts.

So if it's introduced, where is it originally from? Well, this species is native, as many of our introduce species, to Europe [1]. It is now distributed quite broadly across the US (range map here) and Canada (range map here). This species is considered invasive in some parts of the US [2] and is notably good at spreading and naturalizing [3].

If you are having difficulty determining whether the plant you're looking at is Chelidonium majus or Stylophorum diphyllum, just look for the seed pods, which are very different in the two species. Above I have included a photo of the elongated seed pod of Chelidonium majus. 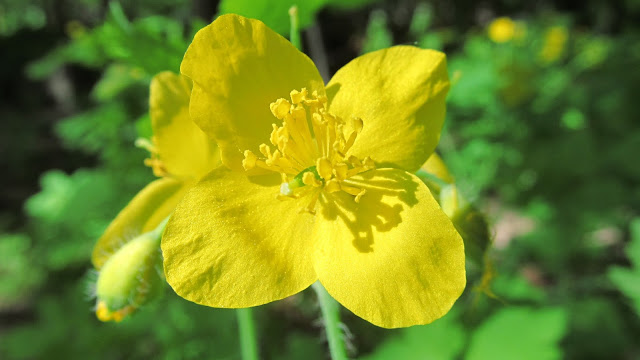 So why was it introduced here? This plant was originally brought over for medicinal purposes, used for a whole range of illnesses and problems including stomach ailments, warts, and menstrual problems [4]. Note, however, that there is not much evidence for its use in these capacities: it is possibly effective (some limited evidence) for stomach upset, and there is insufficient evidence for the remaining claims [4].
Posted by Observer at 7:34 AM